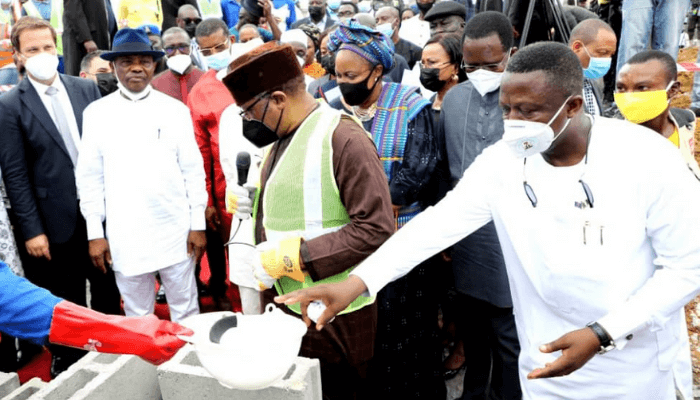 Governor Wike said the Cancer and Cardiovascular treatment centre which features advanced healthcare services such as chemo therapy and nuclear medicine is expected to be completed within the next 14 months.

The governor while speaking at the flag-off of construction work at the Dr. Peter Odili Cancer and Cardiovascular treatment centre at Rumuokwuta Town on Monday, maintained that despite the prevailing insecurity issues and economic problems plaguing Nigeria, his administration has sustained its project delivery mantra.

He reiterated that because Rivers people stood in support of his enthronement as governor in 2015 and in 2019 against detractors, he has vowed to give the best infrastructure to the State and its people.

Speaking about the rational for naming the centre after former Rivers State governor, Dr. Peter Odili, he declared that but for Dr. Odili, an Ikwerre man would not have become governor of the State.

Governor Wike said, it is better to honour a man who has contributed so much to the state while he is alive. According to him, God had used Dr. Odili to bring him to change the narrative that Ikwerre man cannot perform in office, which has been proved wrong.

“I have performed. So, when you hear Dr. Odili is a bad man, it is because he said Ikwerre man will be governor. Now we are governor, must we not thank him? It’s not everybody that can stand firm, so we should thank him. Ordinarily no Ikwerre man, if we are sincere and grateful, should raise hand against Odili and his family.”

Similarly, the governor during the inauguration of the Mother and Child Hospital at Rumuomasi Town, said it is sad that medical doctors have shown less capacity in managing most health facility in the country.

Governor Wike said, such medical officers are appointed as heads of those facility, and they collect money for services that they render, but are still unable to maintain the equipment and worst still, leave the vicinity unkempt.

He challenged medical doctors to be more responsible in maintaining the public healthcare facility and not allow the investment to come to waste.

The minister of health, Dr Osagie E. Ehanire, who commended Governor Wike for the project, said on completion, the cancer and Cardiovascular treatment centre will augment the assets available to treat Non Communicable Diseases (NCDS), and add great value to efforts to reduce NCD prevalence, not only in Rivers states but well beyond, in the South- South and indeed Nigeria.

“I observe that this project has been named after a personality who has built a reputation, not just as a Medical Practitioner, but a foremost public figure in Rivers State as a Former State Governor. I salute you, Your Excellency, Sir Dr. Peter Odili, for your contribution to this State and congratulate you on the recognition the people are giving you.”

Dr. Peter Odili, who on behalf of his family commended Governor Wike for considering him worthy to be honoured, said the Wike administration invested massively in the training of health personnel and currently sponsoring 490 medical students on state scholarship at the PAMO University of Medical Sciences.

Rivers State Commissioner for Health, Prof. Princewill Chike said the Cancer and Cardiovascular Disease Treatment is a three storey building facility that will also have helipad for emergency cases.

He said the centre will be equipped with modern medical equipment that can response to every cancer and cardiovascular concerns within the country and from oversees.

Earlier, the Rivers State government and Julius Berger had signed a contractual agreement for the Construction of the Dr. Peter Odili Cancer and Cardiovascular Disease Diagnostic and Treatment Centre at the Government House, Port Harcourt.

The managing director of Julius Berger, Dr. Lars Ritcher said the project has the potential to alleviate suffering and serve as a beacon for care and for the diagnosis and treatment of chronic disease in Nigeria.

“The state-of-the art and modern cancer treatment center will reduce suffering, reduce morbidity and reduce the need for the seeking of treatment abroad by improving cancer treatment in Nigeria – and making Rivers State the new medical tourism destination.”