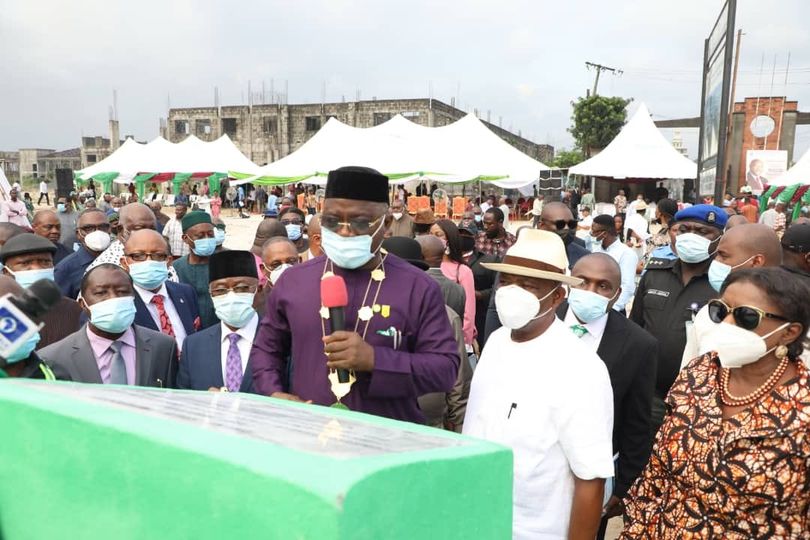 Governor Nyesom Ezenwo Wike says the Rivers State University secured the support of the state government because of the harmonious relationship between the university management and the governing council.

He said that amidst the ethnic coloration given to the appointment of the Vice Chancellor and Pro-Chancellor, there is visible proof that their appointment is justified given their achievements in turning around the fortunes of the institution.

According to governor Wike, the structural and learning infrastructure of the institution have been uplifted through the establishment of four additional campuses that will avail Rivers people more access to tertiary education.

He said the remuneration and other conditions of teaching and non- teaching staff have also been enhanced, which has become the envy of their counterparts in other universities.

Speaking further at the flag off of the construction of college of medical sciences building comprising of faculties of Basic Clinical Sciences, Clinical Science and Pathology of the Rivers State University, Governor Wike announced the award of full scholarship for all the 55 students already admitted into the college of Medical Sciences of the institution. According to him, the scholarship will last the entire period they will be on the programme.

He has also directed the management of the institution to refund all fees paid already by the students, and forward their details to his office for computation.

Governor Wike also mandated the Rivers State University to commence construction work on the building to house the School of Nursing within the premises where the faculty of Medical Sciences has been sited.

The governor said while the previous administration once received in a month N100Billion from the federation account , much of which was frittered away on elephant projects like the abandoned Monorail and non-existence Justice Karibi Whyte hospital , the state allocation under his administration has never exceeded N13Billion per month. Despite the shortfall in revenue, he has within his second term awarded contracts for ten flyovers in Port Harcourt and Obio-Akpor LGAs as well other legacy projects.